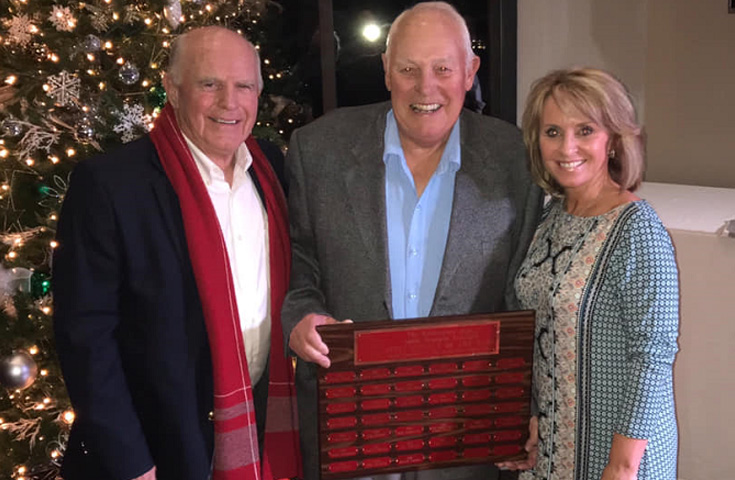 Dalton Thomas Announced as 2019 Apple Citizen of the Year

Dalton Thomas has been named 2019 Apple Citizen of the Year.  Festival Administrator Darci Christoferson and Former Wenatchee Valley College Athletic Director, Sandy Cooprider surprised Dalton with the award at the Oneonta Starr Ranch Growers Christmas Party at the Wenatchee Golf and Country Club, Friday evening.  The Apple Citizen of the Year award began in 1981 to honor the roots of the fruit industry and the leaders that make this the Wenatchee Valley the Apple Capital of the World.

Dalton Thomas is the youngest son of Paul “Tommy” & Marguerite Thomas.  Dalton and his two brothers Paul & Herb were raised in East Wenatchee.  Dalton was a graduate of Wenatchee High School in 1960 and went on to graduate from the University of Washington and continues to be a loyal Husky!  Dalton married his lovely wife Pam in 1964 and they have four children Heidi, Shelly, Jim and Brad, and nine grandchildren.

Paul “Tommy” Thomas and his family founded Oneonta Trading Corporation in 1934 and became the first exporter of Washington apples.  In the early fifties, Oneonta became an award-winning leader in Washington in growing, packing and shipping.  In 1965 Dalton and his brother Herb started working for Oneonta, and in 1971 they acquired the business from their father. In 1972 Oneonta won the first bid from the Central Trust of China to provide apples to Taiwan. Some 100,000 cartons per year for six years were shipped by Oneonta to Taiwan, representing not only the first Washington apples to go to that destination but also the creation of the “Asian pipeline” as it is known now.

In September Dalton was the recipient of Asiafruit Congress’ first-ever Impact Award for his contribution to developing Washington/US fresh fruit exports to Asia. His pioneering contribution as well as sharing his marketing insights with the industry displayed a career-long commitment to industry export programs, seeing the value of increasing promotional activities for the benefit of the entire industry.

With more than 50 years in the fruit industry Dalton has retired and his long and illustrious career, is a significant chapter of the Thomas family’s contribution to the industry. Reggie Collins, Vice President and Director of Chelan Fresh Marketing says “I’ve known Dalton for more than 40 years. You can use all kinds of words – generous, loyal, trustworthy, wise and insightful – to describe him. But one thing’s certain: He’s the one you’d like to be in the trenches with. I mean that both personally and from a business side. I could always go to Dalton and get the true story about what was going on in the industry. He’s benefited this industry with his wisdom and strength.”

Dalton’s Dad, Tommy had a passion for baseball as he was drafted by the Boston Red Sox in 1928. After Tommy’s passing in 1997, Dalton and his brother Herb donated over $750,000 to help construct and maintain the Wenatchee Valley College Baseball Field (Paul Thomas Senior Field) Former WVC Athletic Director, Sandy Cooprider says, “Dalton Thomas is one off the most loyal and generous men when it comes to supporting the youth of our valley.  He has made a difference in the lives of this community that will live forever”.

Dalton also donated over 1 million dollars to turf the infield and build a hitting facility for Recreation Park.  This facility not only benefits Wenatchee High School athletes but will benefit youth of all ages that love baseball.

Dalton has served on the Board of Directors for US Bank Washington, Washington Apple Commission and is a Past President of the Wenatchee Golf and Country Club. He is a lifelong hunter and fisherman and is also an avid golfer.  “Big D”, as he is known by his grandkids, loves spending time with his family at his home at Lake Chelan where he flies the grandkid’s college flags proudly.

Dalton will be honored at 100th Apple Blossom Festival at the All Service Club Luncheon on Wednesday, May 1, and will also ride in the Stemilt Growers Grand Parade on May 4, 2019.